Shall we play...spot the difference?

After my last post I couldn't stop thinking about my sock - should I carry on as it was or should I rip it? 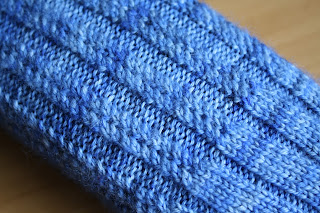 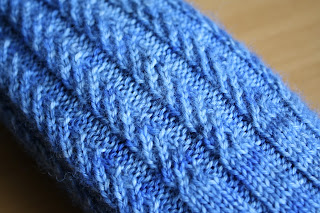 Can you tell what I did?  No, I haven't ripped...yet.  I tried knitted a small sample of the pattern (this time correctly, i.e. including row 3 this time - who knew what a difference that would make!) and found that it was, indeed, slightly quicker to knit and looked a lot better.  More defined.  So, with a huge sigh, I cast on from the outside of my ball of yarn leaving the original sock intact.  Just in case.  But I like the new sock.  In 6 days, or less, I am about up to where I was with the original sock (the heel flap).  When I have finished this one, I will rip the first sock back to the top of the ribbing and reknit it correctly - and be much happier for it.

I'm not certain that I will be finishing any time soon, though.  I am expecting a parcel of wool any day now. Yes, I know, anyone looking in my stash cupboard would wonder why I needed more yarn - but I did!  This is for a special little someone (well two someones, actually) who is having a 4th birthday early next month.  I have decided to knit her (and her young cousin who is turning 2 the following month) an Olearia cardigan with short sleeves and plain lower body.  I think I will be busy!  Why do I always do this to myself?

The yarn?  The Little Wool Company perendale in cyclamen for the pink-loving older grandgirl and raspberry for the little one.  Crossing my fingers it will be reasonably soft as I haven't used this wool before.  Seemed good value and nice colours, both of which I wanted.  If I bought yarn from a store in town I would've been paying at least twice as much.  Knitting may not have been part of their birthday presents, then.  (please don't say I could have spun the wool - neither child has caregivers I am prepared to give up handspun yarn to, unfortunately.  Why do so many young (and not-so-young) people these days think that hand washing is to difficult/time consuming or not necessary?)

Even in summer, when the weather is warm (although the weather today is decidedly NOT warm and summer-like), one must think ahead and be prepared for when the cooler temperatures arrive.  For a knitter, this means working away on all manner of warm, woolly garments to keep a body cosy when the thermometer drops.

As my store of hand-knitted socks has been wearing thin, literally, over the last winter I decided that this summer I needed to get working on several more pairs.  Although I enjoy knitting I still seem to be rather slow at accomplishing any results - the yarn for the first pair was wound into a ball several months before even a stitch was cast on.  But cast on I finally did in mid-December and have worked slowly away at the first Nine-to-Five sock (Ravelry link) since then. 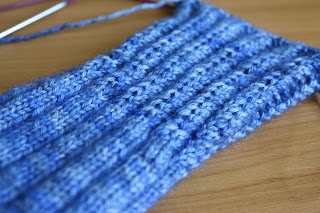 Last night I began on the heel flap as the pattern had it written only to rip it back and replace it with the tried-and-true eye of the partridge stitch as I felt this gave a thicker, more comfortable result.  As I was knitting the first rows of the heel flap, however, I noticed something rather disconcerting.  I discovered that I hadn't read the original pattern correctly.  My sock is pictured above.  The original pattern is below.  Can you spot the difference? Hmmm...you would have thought that I would have noticed that the stitch pattern that I was producing didn't, in fact, look anything like the one in the pattern.  Yes, well, obviously I wasn't paying a lot of attention to my knitting!  I DO like the original much better but I'm not frogging half a sock, and three weeks knitting, and starting again.  I don't think.

I recently finished my Red Current Cardigan knitted in Vintage Purls Sock (as is the sock above.  I'm quite pleased with it although it may be a little long.  As it is knitted top-down theoretically I could unpick the bottom and rip it back a bit and redo the ribbing.  Is it worth it?  I'm not sure.  (Can you tell that I'm lazy?)  I don't have a photo of the finished cardigan and I've only worn it for a total of two minutes so I really haven't had an opportunity to test out how much I really like, or dislike, the length.  Yes, yes, you want to see the colour because it really is the best part! 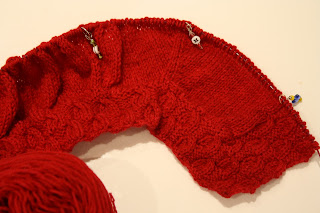 Yesterday I also started working again on my Essential Cardigan which had been in recess for a few months.  This one I'm knitting in Elsebeth Lavold Silky Wool which I had heard lots of good things about.  I'm not really that enamoured about it.  When I first cast on it felt very similar to chenille; a feeling which is still to go away.  The yarn is also rather delicate and will break with a half-hearted tug.  It also contains a reasonable amount of VM, probably from the silk from the look of it.  I'm not sure that I would buy it again although the colour is rather gorgeous in person.

I had got up to the picking up of the stitches for the front band, a part which I had been dreading for two reasons - one being that the dark purple is hard to see at night when I do most of my knitting, and the other because I really dislike picking up stitches.  I know, I did tell you I was lazy!  But I finally got down to it in the sunlight and picked all three hundred and umpteen stitches.  Now to work out where I want the buttonholes placed and carry on and knit the three inches of broken rib.  Yay!  It's nearly finished!  Yes, yes, here's a progress shot from some time ago: As if these weren't enough I also did a test-knit for Jussi Turner - a Katie Snowflake Hoodie which will, eventually, be for my eldest Grandgirl.  Again there are no finished photos (I am sensing something that I really need to work on in the future!) but, as soon as I have a suitable model lined up, that will surely happen.  This was a fun knit and should be great to wear when the weather is a little cooler.  I knitted this one out of Skeinz Vintage DK yarn - really nice to knit with and will hopefully wear well, too. 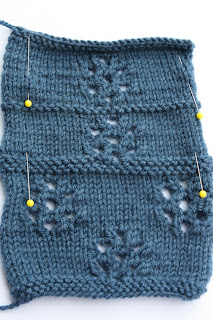 Ooops, I realised that I only have an image of the sample to show you.  Sorry about that but at least it does show that I do sample my knitting first!
Well, that has about caught you up with some of what I have been up to in the last couple of months.  Not everything, but enough of a taste.  Now to go and mutter some more to myself about my sock...
Posted by KathyR at 4:54 pm 1 comment:

It is a new day, a new month and a new year and it certainly is about time that I wrote here once again.  Much time and many events have passed since I last sat down and put my thoughts down on these "pages".  I won't bother going over most as they have been and gone - what is the use of rehashing old events?

But today is a new year.  A traditional time of refreshing and renewing.  Not one in which I make all kinds of rash Resolutions, though.  Not ones which others will hear about, at least!  We all like to think that the New Year will help us to become better and wiser etc, but it takes dedicated and honest commitment to change.  Commitment that needs to last beyond the first few days, or even weeks, of the New Year.  Do I have that kind of commitment right now?  Maybe, but perhaps not to make ALL the changes I would like to see in myself.  So slowly, slowly wins the race.  So slowly even the tortoise may be considered an olympic sprinter!

So, what has been happening chez "Roselea" lately?  Something good happened right before Christmas - I won a giveaway on Amanda's Small Acorns blog!  You can surely imagine how thrilled I was!  See below for the lovely parcel I received: 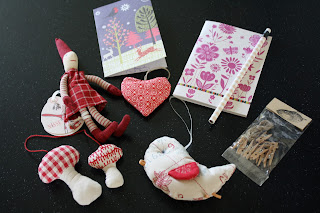 Aren't they gorgeous?  Everything was wrapped individually in either tissue paper or brown paper and string (how long did THAT take??) when it arrived.  The little packet of pegs and string (bottom right) is now on my wall with Christmas cards (including the one Amanda sent with the parcel) dangling from it.  The bird, mushrooms and heart are all hanging on the Christmas tree (I so love ornaments that aren't the usual mass-produced commercial type) and the little pixie looks so cute propping up a photo on a shelf.  The sweet little notebook and pencil are waiting for just the right inspiration to come before they are used.  Now wasn't that a great parcel?

And speaking of parcels, I also received a very unexpected Christmas surprise (a cute sheep tea towel) from a blogging friend (you know who you are!).  Thank you so much!  I never expect to get presents but it is always nice when I do. :)

Christmas was a busy time for me with all my family here either for a meal on Christmas Day or on Boxing Day (or both).  The weather was beautiful and meant that the little ones were able to get outside and play with the t-ball set and the water guns they had been given.  I love seeing kids, both young and old, running around and having fun together.

New Year's Eve was spent going to Dunedin to help our daughter move her larger, heavier furniture into the flat she will be living in this year.  As it was another beautiful warm, sunny day we took the "long" way home by going on a tiki tour - first of all around the Otago Peninsular... 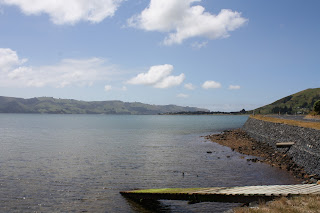 I didn't take many photos yesterday but this one is looking down the Otago Harbour from about halfway along the south side of the Peninsular. 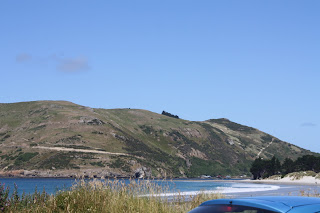 Once we had travelled both sides of the Peninsular we headed up the Northeast Valley and over the old road up Mt Cargill bypassing much of the motorway.  Coming out at Waitati onto the main highway we then turned east a few kms further north at Evansdale and followed the coastline going through Seacliff and past where the old mental hospital was.  Beautiful seaviews all the way along the windy road which crossed the railway line so many times I lost count.  We turned back to SH1 once more at Karitane, where my parents lived when my sister was born many moons ago.

We stayed on the main road then, stopping at Hampden for their famous fish and chips which we ate on the beach watching the waves and the camping folk busily building a campfire for their New Year's celebrations.  From there we headed straight home, happy but tired.

Traditionally, we go to Timaru to watch the fireworks at New Year but this time we were too tired from our travels (are we getting old?) and so stayed home like a boring old couple.  Oh well, maybe fireworks next year?
Posted by KathyR at 4:11 pm 1 comment: