I am still here, in case anyone as wondering. I haven't really been hiding, just not posting for a multitude of reasons most of which I won't go into here.

I have been busy, sort of. I have been writing letters and making lots of phonecalls trying to sort out the problems with our pellet fire. According to the supplier's experts, our fire is problem-free! Why isn't it heating our home the way other people's pellet fires do? I don't know, but the upshot is it at this stage, it looks as if the fire will be going back and we will be refunded some money. How much, I don't know. Probably not enough to cover the full cost of buying a new log burner and putting it in. Funny thing is, today the fire is the hottest it has been yet! At the same setting we've been using. And on the nicest day we've had for a while. Ah well, such is life!

Another thing happening in my life is that I resigned from my "little" job. Technically, this job is supposed to only take about 15-20 hours per month. In reality it is a fair bit more some months, especially when you take into account the time spent in meetings. I have been doing this job (as a favour as no-one else would take it on) for over three years now and have been involved with where I'm employed for about 10 years. Time to take a break as my stress levels, at times, have been too high. Just me, really. I won't cut all ties with them, just the employment side. No-one has applied for the job, yet, despite it being advertised. I will not carry on past August, I will not carry on past August is my mantra!

Spinners and Weavers group has been fun lately with felting being the focus this month. No photos of my work here as it isn't quite finished. We all made little needle books as well as a piece of felt which gets cut to make into a little folded box big enough to take a small piece of jewellery or small cake of soap. It would make a sweet package for a tiny gift. 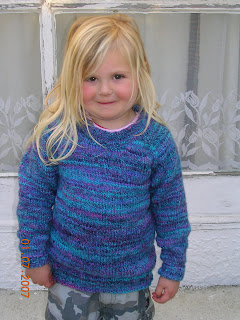 I have been doing a little knitting recently. I finished H's handspun top-down jersey and it even fits, as you can see! The neck is a little sloppier than I wpuld like but not enough to bother undoing it, especially as a little girl was watching me finish it for her!


I am still working on the jersey for L. This has proved to be more of a challenge than I first thought! Note to self: no more working in the round with alternating block of colours. I found instructions in IK Fall 2003 for intarsia in the round so the jersey is now back on track after stalling for some time. This method is not particularly neat, but it is easier than the breaking off, and weaving in, of the colours as I had been doing. Below you can see the progress I had made until I stalled. 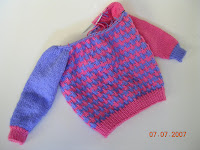 The body pattern is made up of four rows of one colour. On the first two rows every fourth stitch is slipped so that the previous colour is introduced into those rows. Looks, and sounds, more complicated than it really is. I felt that the jersey woudl look too busy if the same pattern was used for the sleeves as well, so I decided to make them plain. That is where the problems came in. Fine if it was knitted flat, but I was knitting in the round, so each round has one sleeve a different colour than the rest of the row. Next time I'll think further ahead. Hopefully!

Tomorrow we are due to go and see the little darlings. Will the jersey be finished? I don't know. I will have an hour and a half to knit on the journey, though. That should help.


Scarily on target for the most part!
Posted by KathyR at 11:09 am No comments: