I love that song (the one played on Gray's Anatomy) but I can never remember the actual title or artist! Never mind, but it is kind of appropriate for today as I am sitting here with my leg propped up on a chair. Most uncomfortable as it is my right leg and my computer desk works better with the left leg propped up. Ask me how I know!

The reason? Tuesday morning I woke up and noticed my right shin was a little itchy as if I had an insect bite. Not again, I thought. For the last two or three years, every January like clockwork, I have had an insect/spider bite on my lower leg (till now, the left one) to which I reacted badly. The first year I couldn't wear a shoe for a month! It appears to be the same this year although the bite mark is not so obvious this time. A trip to the doctor, then the hospital (the joys of living in a rural area are travelling 30 mins (45 km) to the nearest hospital so that the results are available quickly) for a blood test to rule out a clot. No clot, but possible cellulitis. So it is antibiotics for me with instructions to stay off my leg and keep it propped up as much as possible. A perfect opportunity to knit - if I could only decide what to do! As soon as I divide up the bal of Opal I have in mindI will cast on for another pair of socks.

I have had several emails from K - she is fine, has found another hostel in London to stay in for a week or two (too expensive to stay there too long) as is enjoying seeing the sites. She has applied for a job or two but is feeling a little discriminated against when trying for supermarket-type jobs. It seems most grocery people there are Indian or Pakistani and she was told there was no job for her there. This was when they had a job vacancy sign out! Never mind - she would probably be better living, and working, out of London anyway.

Thanks, Bess, for your comment about the scarf! The photo definitely do the scarf any justice but I really liked it too! So warm and cosy and really quite easy to make. I am tempted to make one for me as well!

Sorry there are no photos today. I tried to take some of the Comet McNaught which we have been able to see on clear evenings, but they didn't come out. A pity as it is really quite interesting. Amazing to think we can see a ball of ice and dust which is hurtling through space so far, far away. We are told the tail alone is several million kilometres long! You may have to be satisfied with this photo from the Waikato Times. I couldn't find a link to our local paper.

So, until next, take care!
Posted by KathyR at 1:28 pm No comments:

Finally I am back! The last month has been kinda stressful and fairly busy which is why I haven't posted here since before Christmas.

Our middle child, T, and his partner, S, came, along with the two girl darlings, to stay for three weeks while T was on holiday from work. Because he hasn't worked a full year with the firm he doesn't qualify for the full amount of holiday pay. Plus, as they get paid fortnightly, he wouldn't be getting paid for two weeks once he went back to work. Sucks, eh? So they all came to stay with us to help cut down on expenses.

While they were here T and S worked a couple of days picking strawberries and T worked a full day picking cherries. Also, on the few fine days we had, he started to prepare and paint our house for which we paid him. The house is nowhere near finished but it is started which is definitely an improvement! 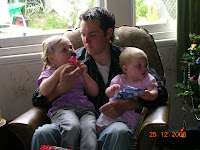 Having two young, active little girls in the household was definitely a challenge! H is 2 3/4 and l is 13 months - they are sweet but definitely not perfect! Special bonds and memories have been forged, though. Something that is more difficult when we only see them occasionally for a few hours at a time.

The day they left my DH, D, went to shift our eldest, K, back here for a week before going overseas. We now have all of her things stored here again. This includes all the furniture and appliances from her house, clothes, books etc! Just when it was looking like the car would be able to fit in the garage soon!

Last week has disappeared oh, so quickly, and suddenly it was Sunday - the day K flew out. We drove up to Christchurch airport picking up my Dad on the way and calling in to see her two brothers etc on the way.

After two hours of waiting around after K checked in it was time for her to go to the departure lounge, the last time we will see her for at least six months. I really don't know how parents carry on if a child dies. I am feeling almost as if I will never see my beloved daughter again! Silly, I know, but it is how I feel.

OK, time to get over it! At the moment K will be flying somewhere over Europe. She is due to land at Heathrow in about 4 1/2 hours so I am guessing she will be rather tired by now. 10 1/2 hours to Singapore, 4 1/2 hours in the airport there then 14 hours to Heathrow - enough to make anyone exhausted. 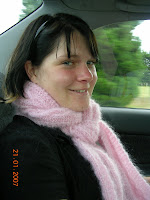 It will also be rather cold for her when she gets off the plane. Coming from somewhere it is supposed to be summer and going directly to another place where it is winter is rather a shock. But she has warm accessories! I finally finished the scarf to go with the fingerless mitts and hat I made her for Christmas! Yay! It may have come down to the wire (I finished it in the car on the way to the airport) but I did finish it. :) (Forgive the poor photo - I had to take it while we were travelling!)

With that finished I will have to get back to some of the other UFOs I have on hand. The decision as to which one will have to wait for another day. There are a few things I really need to get onto in preparation for our little holiday. Yes, we are taking a holiday too! Something that doesn't happen very often but we have decided to take advantage of D's cousin's 50th wedding anniversary (he is a fair bit older than D). We are going to spend 4 nights in Nelson (where D's cousin lives) then cross over to Wellington on the ferry and spend two nights there. I really want to see the Te Papa museum which, I hear, takes at least a day.

After that we will cross back to the South Island via the ferry and drive down to Christchurch and spend a night there. The next day we are going to Akaroa for a short cruise around the Akaroa harbour on the Fox II which is a two-masted ketch. Should be really good! Then it will be home again in time to go to the first spinning meeting of the year the following day. I must say I am really looking forward to it all. The holiday, that is.
Posted by KathyR at 1:19 pm 1 comment: